Money Is the Root of All Evil 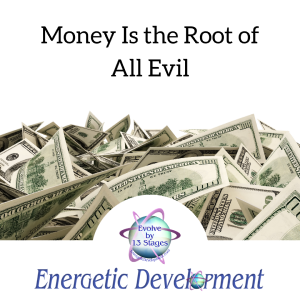 In our experience of success, the human brain’s devolved function of the cerebellar vermis has trapped the human brain in the frequencies of restriction, creating an ever responding out of fear response.

The cerebellar vermis receives somatic (energetic body states) sensory information from all organs in the head and the ascending spinal pathways out of which we make our life choices.

What this means is that within the cerebellum, the cerebellar vermis is receiving sensory signals which then are processed in the cerebral cortex as pain or pleasure. The interpretation of pain signals has devolved into a two-pronged interpretation: “punishment/pain” or “success/pleasure.”

Reflected in how we have parented (punishments/rewards), how cultures have evolved, how religions have emerged, punished and rewarded, etc.  - these things on the Earth plane have created a vibration (frequency) always present. This frequency is always being up picked and funneled into the cerebellar vermis. The cerebellar vermis has evolved to look for what the punishment will be and then to seek the opposite, success.

The concept of money emerged from this de-evolution of the cerebellar vermis. The two-pronged interpretation of somatic (energetic body states) input into the cerebellar vermis, made us always aware of a pending punishment from incoming frequencies. The making of money gave us a way to hold and always have something, such as money, that could provide success or reward. This downregulation has taken one out of “what is” in time and space, which is always in flow – creating, sending, receiving.

Our linear view of frequency, interpreted only as reward or success in terms of money, will continue to devolve our human cerebellar vermis.

The 13 Stages of Energetic Development will over time evolve your cerebellar vermis into movement.

Begin the 13 Stages of Energetic Development starting with Soul Self-Entry and begin to evolve your brain free of the frequencies human existence has created.

Candace: “My response to my brain being trapped by the devolved state of my cerebellar vermis was always fear. When I would stand in line to pay for my  groceries I would get a feared panic attack. When I would sit down and make out my bills I would be totally responding out of fear. It was awful, but I noticed that as I continued to be in the stages I felt less and less fear. The stages provided the frequencies that my brain needed to evolve and move me out of the devolved restricted frequency. A huge relief comes when one experiences this frequency change and is not trapped in fear response anymore.”

Cindy: “Evolving with the 13 Stages and being with “what is” living in flow has been a wonderful feeling, a sense of freedom unlike rewards received in the past.”

Chris: “Before I began the 13 Developmental Stages, I always held a fear of never having “enough”.  Being on the journey of the 13 Stages has developed within me a container of being with “what is”. Ever in the flow of creating; giving and receiving. And regardless of how much money or “prosperity” I have or don’t have, my needs are always met by the Universe.”  Begin the journey of the 13 Stages and break free of your fears.”

Sherry: "As I looked for a picture to post, I saw one of a little girl with her hands over her ears and tape over her mouth, on the tape "FEAR" was written. My thought was, I remember feeling that way, not only as a child but also as an adult. I didn't feel free to trust my own soul or remember who I was until I learned to live in The Star Form of the 13 Energetic Developmental Stages. I am now experiencing my life free of the fear of success!"

Denise: “An awesome article read – Money Is The Root Of All Evil, by Kiera D. Laike. I can relate and see aspects in my life where money, the rewards of having, or the grief and fear of not having, has ruled and formed linear unfavorable responses. Understanding and moving through the traps of my brain – energetically developing from the 13 Stages supports my brain developing in rhythm with synced frequencies, becoming who I am meant to be in “Creating, Sending, Receiving.”

Samantha C.: "Since graduating from college I began using my education, career advancements and increasing earnings to define my "success" yet I lived in fear and anxiety.  Through the 13 Stages, my brain has moved beyond the frequency of restriction to connect with flow across time and space."

What Are Body Energy States? Relationship To Others