What Has Restricted You In Your Life From Evolving 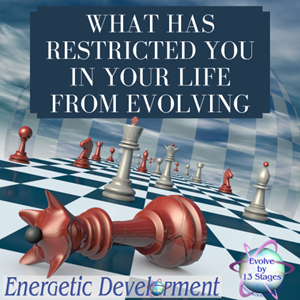 Each form that takes place in ordinary matter must evolve without restriction. Such a deep fear arises in most to whom I have begun to explain this within the last 30 years - for humans have evolved under restriction for so long, the concept cannot be taken in.

The concept being that in the order of a Universe - which is more than 95% dark energy and matter - in which ordinary matter forms, there can be no restriction only reflective relationship with the limitless Pulse Fields (dark energy and dark matter) if we are to evolve.

If you dare to release your fear of forming without restriction, begin the 13 Stages of human energetic development which all occur in the vast container of the Pulse Fields.

The cerebellum being a one-way relay station of the hind brain to the cerebral cortex. It relays messages from the sensing receptors in the body. It is key in the fear response when someone lives in a restricted container which in some way is the energetic state of all humans.

The amygdala signals and relays the fear response. This in part is why when one gets “free” of one thing they end up trapped and restricted in another.

One gets free of one realm and is trapped in another where one must follow a hierarchy. Or one tries hallucinogens only to have a trip or vision which comes only from the drugs effects on the mind. One runs to a new age only to rely on “ancient” energy to save them. One gets free from an abusive partner or boss only to end up with a different one again. One releases ego only to be trapped by another ego state. One strives to be and express one’s “higher self” only to be slammed to one’s lower self.

For if you create a linear concept in a spiraling galaxy you will end up at the other end of what you strived for.

The restricted signals we all live in ever trapping your brain.

Energetic Development is ever being offered from a non-restricted container so your cerebellar tonsil can move to a four-tiered sorting.

Log on to www.energeticdevelopment.com, create an account, and purchase Stage 01. It contains 30 days of free container “Star Forms” and the path to evolve in human form free of the cage.

What Would You Do to Not Fail?